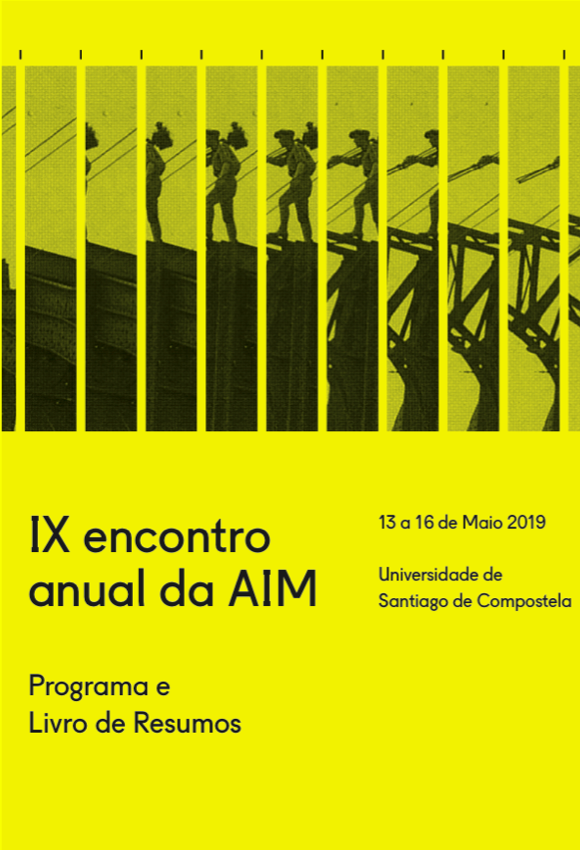 The Annual Meeting of the AIM starts

The 9th Annual Meeting of the Associação de Investigadores da Imagem en Movimento (AIM) takes place in the University of Santiago de Compostela from the 13rd to the 16th of May 2019, co-organized by the AIM and the Faculty of Geography and History of the USC.

On Monday 13rd at 16.30h, in the assembly hall of the Faculty of Philosophy, the Audiovisual Studies Research Group participates in a round table on “Galician Cinema”, composed by the reseachers Margarita Ledo Andión and Marta Pérez Pereiro, in the company of Xacio Baño and Xosé Nogueira, this last one as moderator.

The intervention comes from the analysis of the ‘Novo Cinema Galego’ as a tooll of the more relevant manifestations of the ‘Other Spanish Cinema’, considering the success in international film festivals of filmmakers as Óliver Laxe, Xurxo Chirro, Lois Patiño, Eloy Enciso, Alberto Gracia, Ángel Santos, Xacio Baño, Anxos Fazáns or Diana Toucedo.

«To factors contributed to this situation: the cinematographic politics developed since 2006 from the Galician Audiovisual Agency, with talent grants directly aimed at the creators (without the need of a producer or company) and the coincidence in time of these films with the beginning of the technological-media transformation of the last years, which radicalized the forms of independent cinema, now characterized by formal hybridization and experimentation with genres and formats. This round table brings together various representatives of historiography, analysis, criticism, programming and film direction in Galicia with the aim of reflecting on this process and talking about the present and future of Galician cinema».

The debate will be followed by the screening of Xacio Baño’s Trote (2018), with the presence of the director. The films focuses on Carme’s story, a woman who lives in a Galician village in the interior with her father, Ramón, with whom she barely communicates, and with her sick mother. Carme works in a bakery and needs to escape from that oppressive environment, but it seems that circumstances always prevent her from taking that step.

On Tuesday 14th at 18.00h Marta Pérez Pereiro moderates the table “Feminist film counter-narratives in México and Spain: from the orphan and militant cinema to haptic-performative contemporary practices”. Marta Álvarez (UBFC, Francia), who will adress the feminist counternarratives of the films of María Cañas, and Elena Oroz (UCM3), who will focus on the role of the cinema as counterideological weapon in the case of Cine Mujer (1975-1981), are taking part of the table. After that, at 20.00h, Margarita Ledo Andión is presenting the book A foresta e as árbores. Para unha historia do cinema en lingua galega in the framework of the congress. This public exposition anticipates the act that is scheduled next Thursday 16th in the NUMAX Library, with presence of various authors of this collective study edited by the Audiovisual Studies Research Group and Galaxia.