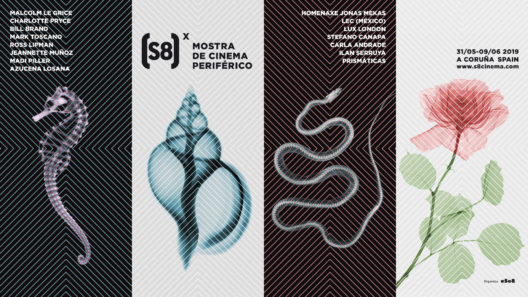 The (S8) reflects on the conservation of experimental cinema

The (S8) (S8) International Peripheral Film Festival will develop its 10th edition from May 31 to June 9 in A Coruña. The image chosen to celebrate these ten years has as protagonists four elements seen with X-rays: a conch shell, a seahorse, a snake and a flower. Inspired by the first radiographs carried out by Josef Maria Eder in 1896 to see what was inside them, these pictures evoke four of the basic foundations of cinema such as sound, projector, film strip and photochemical emulsion. This fits in with the celebration of the festival as a space that has spent ten years radiographing the cinema, searching for its soul.

The conservation of experimental cinema is the focus of this tenth edition, around which will revolve much of the programme of the festival, vindicating the difficulties and specificities of the restoration of a cinema that lives in the margin, differentiating itself from the same processes in the cinema conventional. The exhibition will be attended by experts in the field of international prestige such as Bill Brand, Ross Lipman, Mark Toscano and Janine Marchessault, whose master classes will be complemented with sessions of restored cinema, culminating in a round table where they will discuss together the topic.

Moreover, the organization highlights the figures of Malcom Le Grice, pioneer of expanded cinema and film performance, who will teach a master class around the creative process and star in a session with several of its most iconic pieces; and the artist Charlotte Pryce, who will perform for the first time in our country a performance with magic lanterns.

The distributor LUX London receives this year the white letter of the festival to develop a selection of works from his collection under the name “Nothing is Something: Gestures from the Lux Collection”. You can also see the premiere of the collaborative prototype SEE (W) ING MACHINE, by Prismáticas collective, winning project of the BAICC, the program of international artistic residences that the (S8) carries out together with Acción Cultural Española and the LIFT of Toronto.

The section “Sinais” [Signals] will dedicate a monographic session to the Galician artist, photographer and filmmaker Carla Andrade, in which the author, accompanied by Xisela Franco, will show her intimate relationship with Galicia, with nature, with the land, with the emptiness, and will claim her role as a woman trying to find her own language. On the other hand, this block will also host the world premiere of the film 7 Limbos, by Alexandre Candelo and Berio Molina, a cross between cinema and contemporary art, which will be accompanied by a series of performative actions that will extend the cinematographic experience through different spaces of the city of A Coruña.

“Sinais en Curto” [Signals in short], following its usual plot, selects risky and avant-garde works made by Galcian creators. The route proposed in this tenth edition configures a kind of underground migration history, a key piece of the identity and spirit of this land. The most recent works of the creators Alexandre Cancelo, Margarita Ledo, Sol Mussa, Alberte Pagán, Carlos Martínez-Peñalver, Adrián Canoura, Samuel Delgado and Helena Girón will be shown.

The programme is completed with other varied contents, including the section “Vellos e novos amigos” [Old and new friends], a homage to Jonas Mekas, a selection of the work of the Mexican collective LEC – Experimental Film Laboratory, workshops by Madi Piller and Jeannette Muñoz or an exhibition by photographer Maria Meseguer about the history of the festival. Also, within the framework of (S8), A Cuarta Parede organizes the II Seminar of Criticism, dedicated to Online Programming.